My life is a tapestry of memories. Woven together to make up the fabric of my life.

Like African fabrics, my memories come in a riot of colours – never boring, always calling.

Many threads are soft and perfect. Like the finest Japanese kimono silk. Others rougher, challenging the senses, like the raw silk in beautiful Thailand.

My memories shape me and my worldviews, enriching the narratives in my head, building my experience and appreciation and gratitude for this one privilege that has influenced me more than any other: having been able to travel the world for decades.

I have been to nearly 100 countries, many repeatedly, for work or for pure enjoyment. My world-wise husband has been to many more, traveling since childhood - a truly global citizen. Sometimes we travelled together; more often not – separated physically but not in spirit. 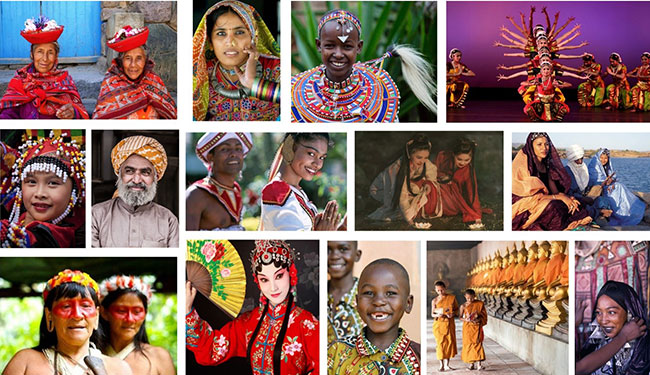 It is a love of the colour and texture of different cultures, different societies, the beauty of our planet reflected in each one.

The love of the act of traveling for itself, and for what it brings.

I have experienced all the evocative clichés.

The quiet after the afternoon thunderstorm in Africa. The largest moon rising with the fragrance of the earth. Completely surrounded by 70 elephants in the Serengeti, the nearest only a metre away. Lake Tana near Bahir Dar breaking the steady patter of my interviews. Hot winds blowing spices in Zanzibar. The Namib where I did part of my PhD research. The wildness of all the wildernesses in my country, South Africa. The stunning Cape beaches where I was a truly bronzed bikini beach girl too long ago.

The drip of soft rain in a Japanese garden; the cherry blossoms with the whole of Japan on the move underneath - fifteen-year olds spending hours admiring blossoms! Soft wisps of mist on the treacherous east-west road cutting across the mountains in Bhutan with thousands of metres drop right next to the 4X4. Snowy Himalayas skimming our plane so close that we are warned not to get a fright. That special old, majestic tree in New Delhi, proudly shown to me by one of my evaluation team members, a stern, highly decorated senior police officer once in charge in Bihar state.

Or swinging from a liana in the Amazon, walking in thick hot air among unique flowers, medicinal secrets still guarded in their silence. Awed by the thunder of Iguazu Falls and golden-red maples in Canada. Tall silent trees in the Black Forest. Snow on the Alps. Lakes glittering in the shadow of Mont Blanc, not far from our current Swiss home.

Isn’t it amazing how every country on earth has its own version of the beauty of nature?

And then, at times, it is intertwined with beauty created by humans - despite the “uglification of the world”, as Sabina exclaimed in the famous book (and film), Milan Kundera’s Unbearable Lightness of Being. Far away places with memorable moments and spaces amidst the unsightliness of humanity's footprint in nature.

In Japan, Naoshima - art, nature and architecture island - and the tiny ryokan where we once stayed in Kyoto. Stunned amazement at the Potala Palace and Jokhang Temple in Tibet, the Great Wall, the Forbidden City - and their contrast with the tremendously impressive modernity of China’s urban areas, and its fantastic infrastructure. Waterfront vibrancy in Beirut, Phnom Penh, Tel Aviv and my city, Cape Town. Twisting streets to the clubs in Havana. Flowerpots and artworks filled with riotous colour in Swiss traffic circles. Wide streets and quaint coffee shops in Berlin for café society hangers-on like me. Extraordinary birthday in the "best hotel in the world" in Dubai. Both the elegance of five-star hotels and the vibrancy of the simplest of market stalls and little lodges all over Africa and Asia. Eating fish just caught, with my feet in the ocean in Bali in Indonesia. Fragrant local dishes in Dakar and Abuja. Masterful sculptures in Zimbabwe (fleeced by the rest of the world who sell them at ten, a hundred times what they pay). The unbelievable treasures in the National Museum in China and in the National Palace Museum in Taiwan. Holding my breath during Bruckner’s 7th Symphony by the Berlin Philharmonic.

I should instead perhaps write an ode to the people of this planet. They weave the richest, most complex colours into my tapestry. There are no words for them, only too many memories.

Smiling, welcoming faces everywhere, from Koh Samui to La Paz, from Yangon to Alexandria. Time with a renowned monk in a rural town in Myanmar. Two weeks on the road in Bhutan with a past diplomat and son-in-law of a Buddhist National Treasure. Sharing time with families and groups of young people across Africa. An unexpected bus journey through Paraguay. Long conversations under the spires of Istanbul. Deeply symbolic, age-old traditions in beautiful New Zealand. Thoughtful philosophical exchanges with women academics in Algiers and with a dear friend in Tamale in Ghana. Famed falafel (the best ever!) in a hidden takeaway in Beirut, bought for us by a celebrated local cleric in flowing robes.

The many scarf sellers in their tiny stalls in Hanoi, and the bead sellers in Nairobi - do they have any takers now?

But the deepest professional memories seared into the fabric of my life are those that remind me of the privilege and responsibility we carry - as people linked together through being human; as professionals in a sensitive field that has to do good.

These memories are the ones that matter most.

Nearly coming down in a plane that skimmed the treetops of the Amazon in Peru for what felt like hours but were only minutes. The women who walked five hours from 3am to see me, the evaluator – making me sad when I heard of their sacrifice, reminding me of the responsibility we carry as evaluators, and the need for humility when wasting people’s precious time. Dirty, hungry small-scale miners in rural Tanzania scrabbling out a life in competition with an oppressive South African mining company. Senior representatives of the five largest religions of the world, huddled around tables in traditional garb, trying to craft together solutions to religious conflict. A women’s group in rural Tanzania asking me for just one thing in return for their time: copies of the pictures I took of them. An old man in a hut in rural Zimbabwe laughing at the stupidity of researchers’ (or evaluators') surveys.

This is life. Yin and yang - connected, complementary, interdependent. Light and dark, and many shades in between. We choose what we see, and how we see, and what we think about what we experience – and use this to guide and enrich our lives.

It is the closest encounters that never leave you. The 10 year old girl crying in my lap while I sat on the floor interviewing a group of child labourers in Tamil Nadu state in India. A senior priest crying uncontrollably during an interview - crying about youth with shattered dreams in his refugee community in Syria. The desperation in the eyes of the restaurant worker in Liberia when the rather large tip for his impeccable service went directly into the pocket of his boss. The haunted look in the eyes of the beautiful six year old beggar girl in the streets of Agra near the Taj Mahal when I turned around and shouted at her to leave me alone – my terrible mistake, one I will never forget. The shadows in the eyes of the government official who gave me first-hand details of the “unexploded ordinances” that caused Laos PDR to include an 18th SDG; how many people know that the countries in the region were bombed for years for no defensible reason, with terrible effects that are lasting for generations? Navigating car-sized potholes in Madagascar that the cost of one bomb can fix for hundreds of miles to give life to the economy.

Yet my continent, Africa, never leaves me. Once it is in your blood and in your heart it never does. Here where, during my travels to nearly half of the countries on the continent, whenever they heard that my forefathers have lived in Africa for more than 300 years, to them I was explicitly an African, a ‘sister’, someone to protect and to engage. Only twice did I feel discriminated against because of my European ancestry, both times by white Euro-Westerners far away from our realities.

There is nothing more important that a parent can do for a child than to expose her to other cultures, teaching her respect and appreciation for that which is different, without undue judgment of that which is foreign or not easy to grasp. A strange thing for an evaluator like me to admit. After all, my profession demands that I assess many things. We get to see the best of the world, and sometimes the worst. But crossing cultures teaches one never to be too quick to judge, to look deeply for the historical and current patterns that make up the psyche of a society, to appreciate the differences and similarities and nuances in the life of every individual, every community, every society. And be aware of our ecosystem connections to this beautiful planet with all its living and non-living beings.

Is this rich contribution to the tapestry of my life now at an end? The irresponsible conduct of the privileged, self-centred “I want my freedom at all costs” crowd has probably seen to that. Or is it just now, while the effects of COVID-19 still rage and accelerate, soon to die down?

Is it selfish of me to miss the experience of getting on a plane to a place unknown? Or return to valued, well-trodden paths? And admittedly, also to the luxury of business and occasionally first class as a very frequent flyer?

Have I done some good, I wonder, or have I only contributed to the ills of the North-South aid industry, or of the governments and universities and think-tanks and companies and foundations I have worked with?

Will giving up traveling contribute enough to the state of the planet - just as my giving up eating meat for decades, or hating plastic - to justify the deep loss of learning from others (most of whom do not yet have ready Internet access), and perhaps only contributing from a distance?

I have always said that my home is where my ultra-clever, wise and loving husband is. But my home has also been “out there” - there where we can feel the world in all its colours, its nuances, its ugliness and its beauty. And hope that we can make some difference, large or small, as we make our way through societies and through nature.

I am lucky that I have my memories.

I do think that I will return one day to the ever-smiling street sellers and dynamic young entrepreneurs, to the dedicated government officials and hopeful youth, to the wise old men and brilliant young women in all the places that I treasure.

I will look for the hope in their eyes. I will also look for the sadness behind so many smiles. Perhaps there will be more of that now.

9 thoughts on “Lost in the loss of travelling the world”