Yuen Yuen Ang’s study of China’s exceptional escape from its poverty trap in just 3-4 decades is significant and useful because it shatters conventional wisdom about how development happens. Complementing the notion of directed improvisation, she highlights a second crucial reason for China’s extraordinary development success: a co-evolutionary process in which markets and governments mutually adapt, influencing one another.

This is very different from the stories we tell ourselves about how change happens when designing and evaluating interventions, especially in international development involving North-South cooperation.

Ang shows not only that markets can be built with weak institutions, but that these institutions have features and practices that defy the norms of good governance. She also highlights the pragmatic and sensible Chinese approach of starting with what exists, making use of whatever is available without endless capacity strengthening initiatives, while creating conditions that allow such co-evolution to gain momentum.

Chinese officials and Chinese development experts insist that its experience is not to be seen as a model for others. They do not expect others to follow what they have done. Yet this component of China's approach to development hold several lessons that can be adapted for other contexts.

Two aspects of conventional development thinking about how change happens – and therefore in the design of 'theories of change' – are proving to be problematic:

One, economic growth is needed before institutions can be built. Or vice versa. This chicken-and-egg debate has been ongoing for decades among development specialists in the North and in parts of the South.

Two, economic growth will only follow if there is ‘good governance’, which means strong institutions have to be in place; this requires lots of capacity strengthening initiatives to improve institutions and governance systems.

Over the last two decades, North-South cooperation focused development thinkers have been enamored with the concept of ‘good governance’. Interventions have been designed on the assumption that if a country is to develop, strong institutions need to be built first. Billions of dollars have been spent on good governance programming with capacity development at the core - some calculate this to be up to a quarter of all North-South cooperation financing. As a rule, such initiatives have a technocratic approach that de-emphasise contextual dynamics such as politics and the informal societal structures and unwritten rules within which newly developed capacities have to sustain. Evaluations show only superficial engagement with these issues - if at all. Furthermore, such capacity strengthening initiatives and their evaluations hardly display the systems-informed approach that is essential when dealing with institution-building.

For years there have been debates in the economic development literature about whether growth is first needed before institutions can be built, or whether institutions are first needed to get growth. Yet until recently no-one asked whether the two could co-evolve. In North-South cooperation there is an inclination to focus on what is not available in a community or society, and then using development financing - often for some form of capacity strengthening - to change this situation. Many interventions have therefore tried to replace weak institutions with strong ones.

Such an approach to development might work if there are already some strong institutions and systems in place, and the political, economic and social contexts are taken into account when capacities are strengthened. But in countries where much has to develop from a low baseline, this will seldom lead to sustained improvements in the long term. Once the funding for capacity strengthening interventions dry up, the institutions return to what they were before, or remain weak, or get distorted.

Ang’s winning entry for the GDN Next Horizons Essay Contest in 2014 reinforces this observation. She observes that foreign aid conditional on good governance results in capability traps, and the country falls into repeated cycles of poverty and failed reforms. Instead, it is essential to recognise that development needs different institutions and strategies during the early and late growth stages of a country. Institutions tend to preserve existing markets. This is fine wealthy economies, but not in contexts where markets need to grow and evolve.

“Our conventional and strongly rooted bias that the norms of the developed West are universally best leads us to regard any deviation from these norms only as weaknesses. Consequently, institutions in developing countries are routinely identified by what they are not, rather than by what they are. …. Poor countries begin with an abundance of so-called weak institutions. They need theories of development that occur through weak institutions. …. When foreign experts enter developing contexts and insist that there is one universal standard of good institutions – namely, that found in wealthy capitalist societies – this by itself imposes a lethal impediment against localised adaptation.”

Theories of change or theories of development in North-South cooperation are therefore very likely based on weak, even incorrect assumptions about the importance of good governance in countries in need of development. And the underlying reason is that planners and implementers and evaluation professionals ignore the fact that development has to be viewed through a complex adaptive systems lens. 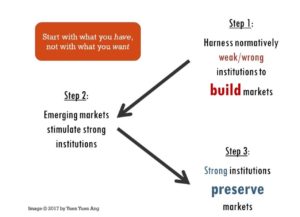 Ang argues with convincing evidence that China has recognised the importance of harnessing weak institutions, and it did so irrespective of whether the status quo allowed for preferential regulation, uncoordinated industrial policies or petty corruption. The markets that then emerged stimulated the development of stronger institutions as demands grew for ‘quality’ rather only than ‘quantity’ growth. Once the institutions were strong, they were able to preserve the markets.

The strengthening of the weak institutions was greatly influenced by good leadership (the topic of an upcoming post) and the development of organisational cultures. Professional bureaucracies emerged that were effective despite the fact that rent-seeking and other forms of corruption remained prevalent at decentralised level as well as closer to the centre.

Ang did not discuss in her first book the role of corruption in the system and therefore also did not touch upon a very important difference between this situation and the corruption at high levels found in key countries in the West: corruption did not distort policy-making in China, while there is much evidence that it has done so elsewhere. It may come as a surprise to many that the Chinese government is in its deepest essence there to serve the people of the country (an issue I will also discuss in a subsequent post). This has kept the national governance system sharply focused on policies that advance national development, rather than on the interests of the elites.

‘First principles’ and the concept of co-evolution

Ang studied the co-evolution between institutions and markets also in other contexts. She analysed similar co-evolutionary sequences facilitating development in medieval Europe, in the United States of a century ago, and in the development of Nollywood in Nigeria. The concept appears to hold true across all these contexts.

While this requires further study, I believe that the concept so well illustrated by her work rings true because co-evolution is one of the ‘first principles’ on which life – and development – is based. A ‘first principle’ is a foundational truth, a basic assumption that cannot be deduced any further. As Aristotle noted, “The first basis from which a thing is known.” Working with ‘first principles’ means thinking like a scientist: What are we absolutely sure is true? What has been proven? In the case of social development, in my view 'first principles' refer to the key concepts that define complex adaptive systems, such as non-linearity, emergence, path-dependence, synergistic effects and co-evolution.

In my view, our development thinking, frameworks, models and theories of change should much more forcefully reflect these ‘first principles’. They are (further) localised through the value systems and dispositions of the societies at which they are aimed.

In my next post I will discuss the lessons for practice that evaluation professionals can learn from how the notions of ‘directed improvisation’, ‘co-evolution’ and ‘localised adaptation’ have been applied in China.