I connected with Daniel in 2019 when I was given access to a draft of the GIZ paper he discusses here. I found it more insightful than most - and important. A single intervention is seldom sufficient for systems transformation, but we know an intervention can be designed and implemented in ways that can help spark or increase the potential for transformative change. Daniel and I presented the ideas in this paper in a very well-received workshop on the topic during the 2019 IDEAS conference in Prague. It remains a work in progress, but GIZ has once again stepped forward, this time with a valuable contribution where transformation, sustainable development and evaluation intersect. We can all help accelerate progress towards the essential transformations the world needs now by experimenting with these types of concepts in evaluation practice.

We found: There are many discourses, even more definitions and again more positions on transformative change. There are many on-going and anticipated transformations that may all be important for addressing the climate crisis – and other social and environmental problems at the same time. It sounds like déjà vu from decades of negotiating sustainable development that environmental, social and economic questions should hardly be separated from each other.

Can we for example really solve the climate crisis without transforming recent economic paradigms, still suggesting growth, competition, acceleration and linear production and consumption as the way to prosperity? Can we solve the climate crisis with recent fossil energy, traffic or intensive agricultural systems? Can we really ensure sustainable jobs, the end of poverty and prosperity for all with these systems and paradigms? Will incremental improvements and reforming these systems be enough?

The 2030 and climate agendas call for no less than ‘transforming our world’. How can societies get majorities and decide for disruptive transformative change? How will they care for the ones whose identity, jobs and skills at first sight might seem redundant in a new system?

Soon we had more questions than answers. We were caught in wicked problems, tremendous complexity, uncertain knowledge and conflicting social values, norms and behavior.

At this point, no person or document we had access to could summarise all of this in a way that would have enabled us to suggest something like a ‘GIZ position’. So far, we are more used to facilitating incremental changes or reforms.

So, we decided to take the longer route and write our own guidance. We moved beyond the sectoral focus on environmental issues. Step by step we tried to create our own understanding of transformative change in general and the design principles it may require for our interventions.

We found that for us, transformative change converts a current ecological, social, political, economic, scientific, or technological system or all systems together into a fundamentally new one that, from there on, forms the new mainstream.

We expect the new system to perform better with respect to the goals we have.

Our ability to facilitate transformative processes and to assist partners with their own transformAbility may be guided by the following design principles.

One, we need to deliberately question a current system in general while suggesting a new one (paradigm-shiftAbility). This can include new paradigms, regimes, identities and narratives, or similar disruptive changes. Transformative interventions can involve incremental changes or reforms to provoke tipping points. But these forms of change may also prevent transformations by cementing current systems (unwanted path dependency). Not all interventions addressing the SDGs must be transformative, but if they have this ambition, they should be able to show clearly how they contribute beyond incremental change and reforms as a measure of transformative relevance.

Two, we need to strive for scaling up disruptive innovation to a new mainstream on a defined system level (scaleAbility). On a vertical scale, our interventions may be located and further scaled from local to global levels, and on a horizontal scale comprise single technologies, norms, etc. (small transformation); entire sectors, like energy or agriculture (medium transformation); up to whole societies, like carbon neutral and digitalized societies (large/great transformations). No matter at which system level we locate a transformation (transformative ambition), we need to create a new mainstream - otherwise it would not be a transformation of a system. Single projects and usual timeframes will not suffice to support transformation, even on ‘smaller’ levels. Interventions should systematically find and support champions and resources who are able to catalyse tipping points towards a new system. 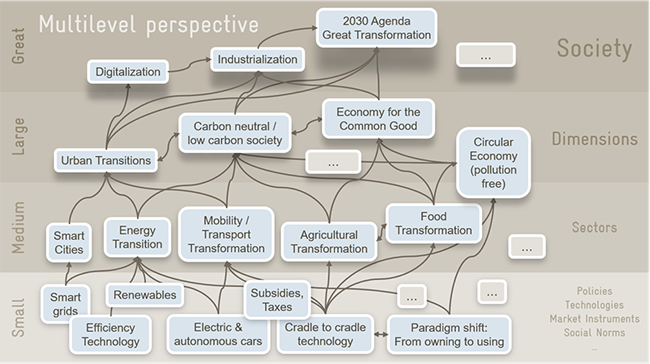 Three, we need to strengthen the resilience (resilienceAbility) of a new system, so that it can adapt further and be sustained (sustainAbility) while weakening the resilience of a current system. Otherwise, a new system may collapse again soon due to old path dependencies. This can for example involve shifting financial flows and incentives, and creating societal acceptance.

Four, depending on ambition and resources, our transformative portfolios should address as many ‘dimensions of transformation’ as possible, and facilitate their interfaces (multidimensionAbility) - such as environment, society, science, technology, policy and markets. Acting as ‘honest brokers’ at science, society and policy interfaces requires the special skills of integrating different values, norms, disciplinary routines and different forms of knowledge, among others.

Five, the importance of societal acceptance, skills and behavior are another key to transformation that we tend to underestimate, and that we do not fully exploit. We need to act bigger with our approaches towards social change (social-changeAbility), reaching millions of people with adequate and legitimate communication formats. We need to be able to systemically assist with building transformation knowledge through triple-loop learning.

Six, related to this, we should facilitate deliberation about which transformations to aim at and how to shape the new systems for the sake of just transitions and leaving no one behind. Strong participation requires strong facilitative and co-productive capacities and resources, up to joint decision-making within new democratic fora. A central design principle here are truly reciprocal relationships between actors (reciprocAbility) to allow new complex systems to emerge, to be socially robust and to build new self-reinforcing feedback loops.

Seven, transformative interventions should finally be able to deal with ‘super complex’ systems in which transformations can hardly be foreseen, controlled or steered in a ‘classical’ management fashion (complexAbility). This environment is characterised by emergence and non-linear behavior. Long phases of minor incremental change may be followed by sudden tipping points. Interventions should be able to navigate complexity and permanently adapt to (adaptAbility) and use unforeseen changes.

Changing how we work

We believe that these principles are ‘ingredients’ that enhance the chance of successful facilitation of transformative change. They allow differentiation in the transformative quality of interventions and their evaluation.

They also call for paradigm shifts within our own work in order to transform our world.

We are used to create strong impact hypotheses and promises with SMART indicators, as we assume that we can have strong control over outcomes. Usually, the bigger the funding, the longer are the preparation times, and the more ambitious the predictions. The complexities of what happens in real life often takes such interventions on different routes, yet changes to the project design during implementation can be a challenge.

We then tend to take one of two possible routes.

We can take deviations as an opportunity and try to adapt in order to create truly relevant impacts. This means we may ignore some part of the impact promise and add a parallel reality. Or, we can ignore the emergence and unforeseen changes, and strictly adhere to and report against the master plan (often represented by a rigidly held ‘theory of change’. In this case, deviations from the impact promise are interpreted as failure.

Often, we try to do both – and as a result, waste public resources and personal energy between these overlapping but parallel realities.

Either way, the usual reflex is to require even better, more differentiated impact promises, and smarter indicators. This takes us into the vicious circle of a ‘complexity trap’. 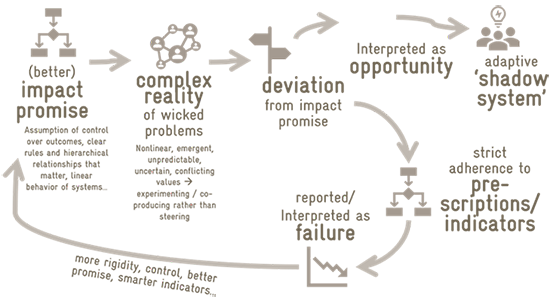 We hence argue for shifting the balance from impact promises towards ‘process promises’ in order to cause better impacts.

In a world of truly adaptive interventions, the difference between preparation and implementation might even disappear. We might start talking, do small interventions, raise more funding, grow along with the local ambitions, never stop talking and so forth.

Until then, we need to try our best to influence transformations under recent systemic conditions of international cooperation and further advance our approaches. We will try to remind ourselves and others as much as possible that “the significant problems we face cannot be solved at the same level of thinking we were at when we created them” - Albert Einstein.

Daniel Kehrer works as an advisor on environmental issues, risk management and transformative change for the German international cooperation agency Deutsche Gesellschaft für Internationale Zusammenarbeit (GIZ) GmbH. He is involved in developing and backstopping projects around the world and advancing approaches, like a recent suggestion on how to promote transformative change. His background in ecology, sustainability sciences and science-society-policy interfaces offers a holistic view on facilitating sustainable development.