This post introduces a book of great relevance in the fields of evaluation, governance and evidence use. Mine Pabari from Kenya and I met more than 15 years ago when we both worked as consultant evaluators with Nancy MacPherson at the World Conservation Union (IUCN) near Geneva in Switzerland. Mine was a relatively young evaluation specialist, full of energy and professional wisdom. It was therefore a real pleasure to connect again years later. Mine is now working with Athari, a consulting network that among others focuses on evaluation. One of Mine’s important recent contributions is the book, Using Evidence in Policy and Practice: Lessons from Africa, co-edited with fellow South African Ian Goldman.

For many years I worked with an organisation that identified as being a global authority in its particular field of work. The organisation comprises of a network of thousands of experts and much of its work centres around influencing policy and practice.

If you were a fly on our wall, you would most likely witness a considerable level of frustration. We constantly struggled with getting policy makers to pay attention to the findings of our robust science, generated by the strongest experts in the field. We simply could not understand why they disregarded such strong evidence.

A book on evidence use in Africa

Soon after I left the organisation and much to my delight, Professor Ian Goldman invited me to a book project on evidence use in Africa. Working with a team of policy makers and researchers, we explored the factors that influenced the use of evidence in informing policy and practice through the lens of eight case studies that took place in five different countries and one region, namely West Africa. The research explored evidence use from a policy makers perspective – that is, from a demand rather than supply perspective. Policy makers were involved as authors of the case studies alongside researchers. The research was guided by a common analytical framework – see below - which combined and built upon two existing frameworks, the Science of Using Science, and Context Matters. 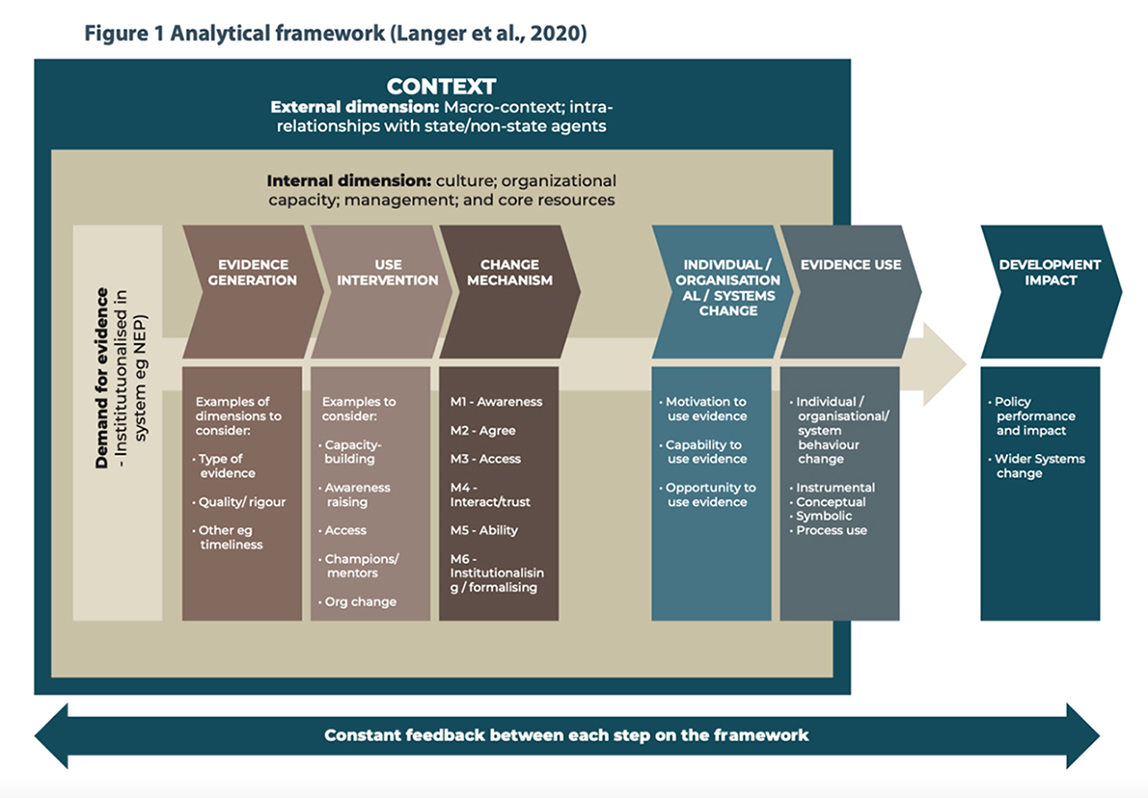 In chapter 13 of the book we pull together the findings and lessons that emerged around the use of evidence from the case study research. We also summarize this chapter in a policy brief, available on the books webpage, hosted by CLEAR AA.

For this blog piece, I focus on my personal lessons from this journey as an individual that worked within an organisation that sought to influence policy and practice, largely by acting as a knowledge broker – linking evidence generators to evidence users. Now that the book is published, I reflect on what I would do differently knowing what I know today about evidence use.

Reflections on better enabling evidence use

Understand the policy maker and the politics of policy making. As authors such as Cairney and Parkhurst have pointed out, a policy maker is driven and constrained by the very complex realities of what are essentially political processes. Policy makers are often pulled in multiple directions, negotiating corridors of power with very little time and space to critically reflect on a piece of research (particularly when they did not ask for it). Building relationships with policy makers, developing insights into their policy questions and challenges, as well as the policy and political processes they navigate on a daily basis is all well worth the investment.

Step out of the evidence bubble. Decision making in the real world is often pushed and pulled (and often held perfectly still) by multiple forces, both internal and external. As Weyreuch points out, if we understand these forces, we can plan our evidence journeys better towards use. For example, if the wider political environment that does not enable or encourage public participation, citizen science and engagement is unlikely to be successful. Or, if there are champions of evidence use amongst decision makers, one would do well to know who they are and build a relationship with them to ensure their support in navigating the decision-making corridors.

The messenger often matters more than the message. Trust between the evidence generators and users is essential, particularly in the event that the evidence goes against prevailing beliefs or values. Trust can be a factor of reputation but often is also dependent on relationships, cultivated over time. In the case studies, we saw multiple examples where spaces deliberately created for dialogue went a long way in enabling individual users to engage with the evidence, and with one another. In doing so, evidence users were able to better understand the evidence as well as one anthers perspective.

Focus communication on the user and not the evidence. How the evidence is communicated is as important as who communicates it. It is extremely important to package and communicate in user friendly language and formats, communicated at convenient times, and to ensure that the evidence speaks equally to feasible solutions as well as a situation and its challenges. In the case studies, multiple ways of communication were used – including, for example, breakfast meetings bringing together policy makers and experts.

Evidence use is a process (not a document). Often, we turn our minds and energy to evidence use after the evidence has been generated. Once the research is completed and the evidence has been gathered, we start to disseminate policy briefs and convene workshops. However, for evidence to actually be useful, use must be planned for at the onset and not as an afterthought. In the case studies, we saw use in organisations that had invested in institutionalising evidence use - by, for example, formalising structures/committees to engage in the evidence journey and develop management responses to evidence - or built capacities of evidence users to appreciate the value and importance of evidence prior to evidence being generated.

The world is increasingly noisy with far too much data, information and opinions. Navigating the challenges that lie before us amidst the noise depends entirely on our collective wisdom – including our ability to recognise, access and use good quality evidence, and to learn how to better dialogue, share and build consensus, especially across polarised perspectives and values.

Mine Pabari, Managing Partner at Athari in Kenya, has more than 20 years’ experience in resource management and sustainable development. She conducts evaluation, supports the development of MEL systems and provides technical advisory services across East and Southern Africa. She works with local communities, social movements, governments, NGOs and international organisations. She is co-editor of the book, Using Evidence in Policy and Practice: Lessons from Africa, published in 2020.