Some years ago I was on an evaluation assignment in the Mekong region, dealing with labour issues. In an interview in a (Western) embassy the diplomat vehemently argued that the population should vote the government out of office because they had quite violently suppressed labour unrest few years earlier.

A few hours later I met with government officials. They noted that the country had been on a steep development path with between 6-13% growth in GDP over two decades; that within living memory they had been one of the most bombed and hence devastated countries in the world; and that they would allow nothing, certainly no instability, to divert them from their development trajectory.

Two arguments - each one valid depending on one’s values and lens on the world. A good example of what evaluators face in any assignment: different perspectives based on different worldviews and values that we have to analyse and integrate with our own biases and value systems. Like detectives, before we reach conclusions we need to delve beyond the obvious and pursue different lines of evidence and argument in order to close in on ‘reality’.

In essence, we have to work deliberately to see the world through others’ eyes.

This is not easy when we deal with very different cultures. In his brilliant book, The Patterning Instinct: A history of humanity's search for meaning, Jeremy Lent explores the roots of the divergence between how the West and the East see the world. He situates this divergence in the ‘core pattern of meaning’ through which people make sense of the world: in the case of the West, what he calls the “split cosmos, split human” which, among others, facilitated the development of science as we know it; in the East, the “harmonic web of life” that promotes a more long-term, holistic view of the world.

Despite the blending of cultures when societies come in contact over a prolonged period, core patterns continue to shape their intentions, perceptions and behaviours. Now that China's rise threatens certain narratives of a 'good' world order, it is essential to acknowledge that such divergence exists. Even if this does not remove the inevitable tensions, it will at least explain some of them. The opening paragraphs of The Patterning Instinct are helpful - they highlight the different worldviews through how the journeys of Christopher Columbus and Admiral Zhang He unfolded at a time of great disparity in sophistication between the two nations. It is worthwhile using this story as food for thought. 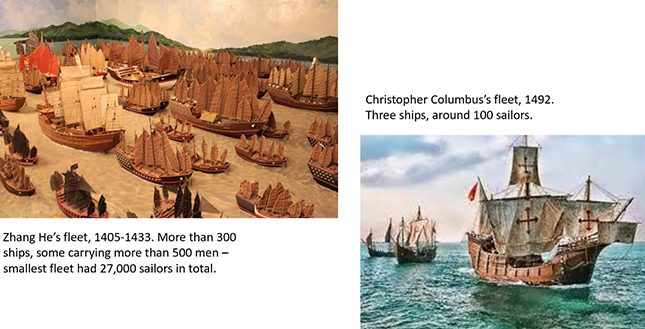 So, we need to take the time to take a deep breath, reflect, and stop making mass media-driven assumptions about other people.

We have to roll back all the simplistic narratives about what China has done, is doing and is intending to do. We have to become much more sophisticated in what we know and in how we think about this massive civilization. We have to understand much more, and nuance much better our narratives about its motives, achievements and plans for the future. We have to be smart enough to look beyond the spin about China.

My life under apartheid South Africa alerted me to the power with which unchallenged narratives infect the mind and create a too-simple ‘reality’. I have since then maintained an intense dislike of distorted views cultivated through subtle propaganda. That is why, between 2009 and 2014, I read key media stories to see how they played out in 15 different countries on five continents across conventional media and in the work of independent investigative journalists. Today I can predict a certain campaign angle as soon as I see a first article or tweet appear somewhere in English.

So, before arguing about China's performance and role in the world, we need to make sure that we have references to sophisticated analyses and credible evidence that show understanding of different value systems and perspectives on the world. Read the never-ending flood of negative musings on China and its supposedly coming demise by opinion-makers and think-tanks in the West. But also read or listen to analyses by Yan Xuetong, Zhang Yun, Zhang Weiwei (see also here as example of his 10 podcasts on ‘The Chinese Way’), Yuen Yuen Ang, Justin Lin Yifu, Klaus Mühlhahn, Deborah Brautigam (see also here), Martin Jacques and Kishore Mahbubani (just some authors from my collection of more than 600 sources on China matters). Then we can more confidently share our views about China, its intentions and its emerging place in the world.

With all this in mind, in my next and last post on ‘context’ before I come to the actual lessons we might want to learn, I intend to turn briefly to four dominant narratives about China: democracy, human rights, China in Africa and the latest spin – the Belt and Road Initiative (BRI) 'debt trap'.

Note that I emphasise again that I do not argue that one argument is right and the other wrong. Instead, I highlight other perspectives that can help balance the dominant narratives that we sometimes so unthinkingly buy into. Otherwise we will not appreciate the lessons that we can learn.

1 thought on “China’s Transformation, Part 3. Seeing through others’ eyes”